There’s no doubt that bidding in auctions is lots of fun and very addictive. You can get some great deals, but if you’re not careful, you can also spend more money than you want to.

The problem I’ve noticed is that it can be very difficult to really know where you stand as far as money spent vs. auctions won. There are lots of factors involved in getting an accurate picture of our overall profit/loss from our bidding activity. Probably the most important factor is knowing the exact value of each bid we spend. Here’s what I mean. Say we get down to 0 bids in our account and then we purchase 200 bids @ .15 per bid. At this moment, each of our bids has a value of 15 cents. Now let’s say we spend 100 of those bids on a 1000 bid pack and win it for $5.00. What is the value of each of our bids now? If you answered .03 per bid, you are correct.

Now let’s say we did not win the 1000 bid pack auction. We would have lost $15.00 worth of bids and our remaining 100 bids would still have a value of .15 per bid. As you can see, the outcome of this one auction had a major impact not only on our overall profit/loss, but also on the overall value of our bids.

I’m pretty certain that most people don’t have the slightest idea how much money they are winning or losing. I know I didn’t until I began to track my own stats. AllPennyAuctions.com attempts to give you an idea of how well you are doing, but there are some big problems with the way they do their calculations. First, they use a constant .16 per bid for every auction. As we’ve seen above, that number can vary dramatically. The next thing they do is to value bid pack auctions at the full .60 per bid. This means that you could spend 2000 bids to “win” a 1000 bid pack for $60, and according to them your profit would be $220. $600 (1000 bids @ .60) – $320 (2000 bids @ .16) – $60.00 = $220 profit. This, of course, is completely insane, and may explain why some people bid the way they do. You and I both understand that the real impact of this auction is that we spent $60.00 to loss 1000 bids.

As much as I enjoy looking at the $6462.63 that APA says I’ve profited, I decided I wanted a more realistic picture of my bidding activity over the past 7 months since I joined DealDash.

For more than 10 years, I’ve used an amazing database manager called HanDBase which allows you create databases to keep track of anything on your Windows PC, Mac, or any mobile device. The database I created to track all my DealDash transactions provides all the statistics needed to get an accurate picture of where you stand. With each transaction an accurate cost/bid is calculated which results in realistic profit/loss statistics. The database tracks win/loss/BIN percentages as well as the total spent to Buy It Now. It even keeps track of bid pack auctions and shows how many bids have been won/lost. Here are a few screenshots. 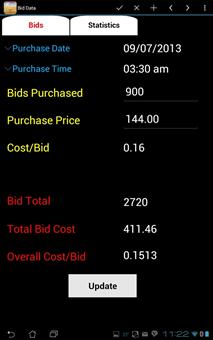 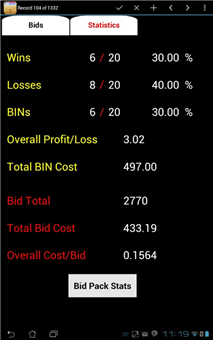 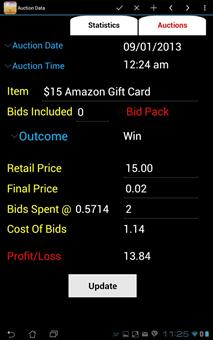 2 thoughts on “Track Your DealDash Stats”

This site uses Akismet to reduce spam. Learn how your comment data is processed.