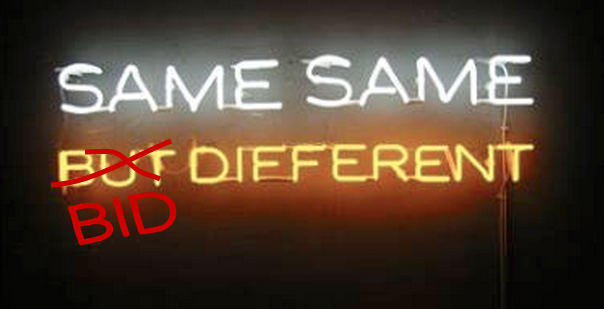 Important Info To Know About DealDash One Per User Auctions

I have been a bidder on DealDash for 18 months now and recently learned something that I want to pass along. I thought I knew pretty much everything with 280 DealDash wins under my belt and was more than a little surprised to learn this.

On January 30th, my husband was bidding in a 5000 Bid Pack auction. Although he signed up with DealDash about 11 months ago, he has not been a terribly active participant.

NOTE: two people in a household can have a DealDash account BUT CAN NEVER bid together in the same auction. DealDash has security measures in place to detect this form of cheating.

Anyway, to continue with the story, 5000 Bid Packs are among the One-Per-User auctions. The auction was down to my husband and two other bidders. I showed my husband how to check the wins and current participation of the two other bidders by viewing statistics on AllPennyAuctions.com. I like to see if the others are using large bid packs that they have recently won. I was stunned to see that one of the other bidders had won a 5000 Bid Pack on January 27th. To beat all, he had only joined about a month before! How could that be? I was sure there some kind of glitch going on so I instantly wrote to DealDash Support. As usual, I received a swift reply from Support and this is what I learned.

This very lucky new user had won his first 5000 Bid Pack during the Buy-It-Now Bid Pack Promotion for 20 cents a bid instead of the usual 60 cents per bid! Therefore, there was a different auction description and technically a different auction even though the ultimate prize was the same. With that information, I advised my husband to drop out of the auction. It was not wise to bid against someone who had that many bids at their disposal. I already knew that I could win, say, two KitchenAid Stand Mixers as long as they were a different color because this technically made them a different item but had no idea that a difference in price also makes it different…. Did you know?

Basically because DealDash had a special promotion for Bid Packs where the BIN price was slashed to 20¢ per bids instead of 60¢ per bid, it technically made them a different auction – similar to the different color for the KitchenAid Mixer example.