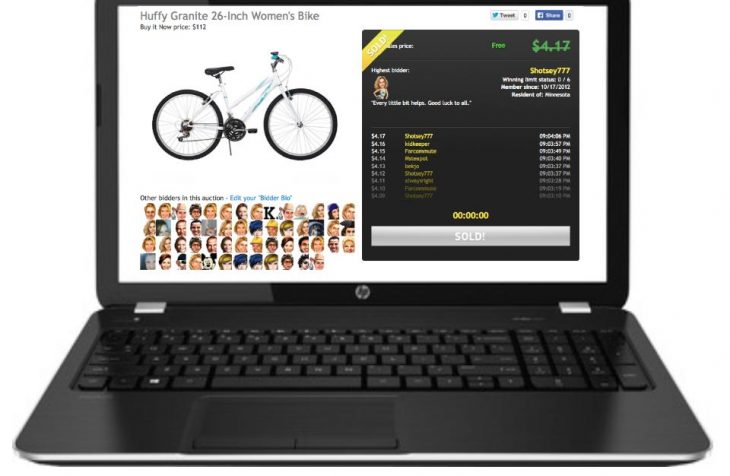 My 1st big win on DealDash was an HP Pavilion laptop computer. It has everything you could want on a computer. Windows 8, touch screen and it’s wireless.

The best thing about this computer is I won it on a DealDash.com during a free auction weekend where DealDash paid the final winning sales price. After I won this computer I then had to work hard to convince my kid that I was not going to give them the computer but keep it for myself to enjoy it while bidding on Deal Dash in the future. With the win of this computer my sister and best friend also decided to give DealDash a try. They have some great experiences and won some nice items too!

I must say I was so happy to win this computer. This DealDash win is the computer I wrote this blog entry on. I also recently won two bicycles and did a Buy it Now on one bicycle. The two are identical, I bid on them for my granddaughter and myself to spend quality time when she has sleep overs at grandma’s.

The other bicycle was a 15 speed bicycle. I wasn’t paying attention while bidding and did not read that it was a 15 speed bicycle. A speed bicycle wasn’t what I wanted, so I donated it to a charity that collect bicycles for less fortunate children. I surely hope it made a child very happy.
My winning bids for the bicycles were priced at $3.87 and $8.53! You can’t hardly beat that! My granddaughter says “I have the best Grandma in the whole world.” That meant the world to me. I also like to win movie gift cards on DealDash because they make for great rainy day time for grandma with the grandkids. When it’s rainy we don’t ride the bikes but I do wish DealDash had more bicycle accessories to bid on like front and rear baskets, handle bar rear view mirrors, bicycle locks, etc.
How about you? What was your first win like?
By suvgal